There is one cake trend that is already dominating 2016 and that is ‘Buttercream Flowers’. With a little bit of practice, a touch of colouring and a number of cake nozzles, realistic flowers are easy to replicate. This inspired me to make these adorable Chocolate Plant Pot Cheesecakes topped with Vanilla Cheesecake flowers.

Last weekend, Instagram, Twitter and Facebook were spammed with pictures of roses and chocolate. I would be lying if I said Valentine’s didn’t influence me to make these mini chocolate cheesecakes topped with cheesecake roses. After two practice bakes and hours of YouTube research (and being brainwashed by Valentine’s posts) I felt it was time to make cheesecake roses for a blog post. Finally, I had an excuse to dig out my silicone plant pots again, which I used in my Oreo Cheesecake recipe.

Don’t be fooled by their miniature size, they still pack a huge chocolate punch. Their dense chocolate texture is balanced with a nutty base and creamy vanilla topping, making it the ultimate chocolate fix. To make these you will need 6 super cute silicone plant pots (I purchased mine from Dunelm), 3 piping bags, straight petal nozzle 103, curved petal nozzle (i don’t know the number but it is the same size as the straight petal nozzle) and a leaf nozzle 66.

Step 1: Place the chocolate digestives in a food processor, and blitz the biscuits into a fine crumb. Next add in the Nutella, blitz again until well combined. You can crush your biscuits in a large mixing bowl or zip lock bag if you don’t have a food processor, but melt your Nutella in the microwave first to make it easier to mix in thoroughly. This step is easier if you have a food processor. Then evenly distribute the Nutella biscuit mix between the 6 plant pots, use the back of a tea spoon to pack the biscuits down. Place in the fridge whilst you make the filling.

Step 2: Place the cream cheese and icing sugar into your mixer, using the whisk attachment mix on a medium low speed until thoroughly combined, place a tea towl over the mixing bowl to stop the cloud of icing sugar going everywhere (I learnt this the hard way). Next add the chilled double cream, whisk on a medium high until the mixture thickens. 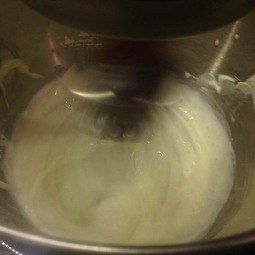 Step 3: Remove the bowl from the mixer, and pour in the melted chocolate. Using a silicone spatula quickly mix together, this prevents the chocolate from splitting. Get the plant pots from the fridge and evenly distribute the cheesecake filling between the pots. Then place back in the fridge, whilst you prep the decoration. 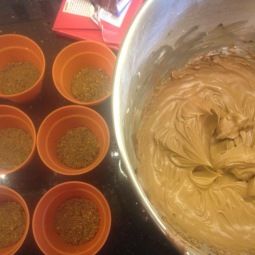 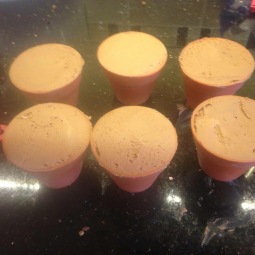 Step 4: Once you have washed up all your utensils and mixing bowls, it’s time to get them covered in cheesecake again. Place the soft cheese, 3 tbsp of icing sugar and vanilla into your mixer and whisk on a medium-low speed (use the tea towel trick again), then add the double cream and 1 tbsp of icing sugar, mix again on a medium-high speed until the mixture forms soft peaks / thick enough to hold itself. Split the mixture between three bowls. Two of the bowls will be for the rose petals and one will be for the green leaves. You won’t need as much mixture for the leaves.

Click here to watch a video I found really useful, she shows you how to pipe the perfect two tone rose, and takes you through it step by step. However, she uses curved petal nozzles for both colours, I think I works nice the way I have done it. Make sure the thick end of the nozzle is pointing down and the thin end is pointing up. 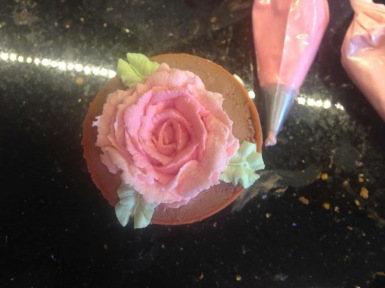 Add green colouring into the left over mixture and place into a piping bag with the leaf nozzle. Pipe three petals around the each of the roses. Pop in the fridge until you want to serve them.

Before you make these bad boys do your research first! I found this made me a lot more comfortable when piping them because I had watched enough videos to know what I was doing and how to do it!

Keep up to date by following me on: